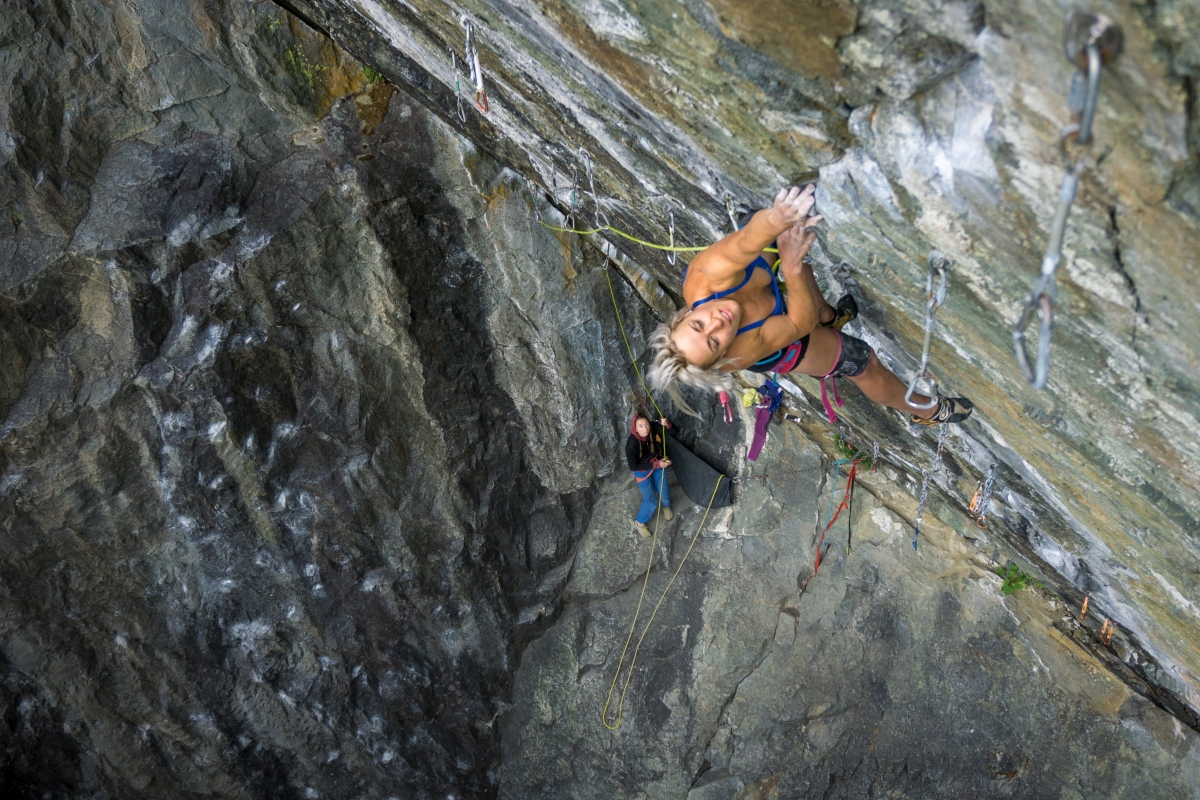 It’s called the Big Show for good reason. I so vividly remember the first time I laid eyes on it: a freshman in college visiting Canada for the first time and a gym climber who could count on one hand the number of times I’d touched real rock. It was the most impressive and intimidating natural wall I had ever seen; a perfectly flat piece of granite tilted at a fourty-five degree overhanging angle with a slab mirroring it below like a right angle tilted on its side. People must travel from all over the world to climb on this wall, I thought. When I looked in the guidebook and saw that the easiest route up it was 5.13c I was disappointed, but not surprised. Of course there was no way such a steep wall could boast routes within my ability. I was gym strong but lacked experience and more importantly perspective. Climbing any 5.13 route seemed like a pipe dream, let alone on something like this.

That summer I made my way to Tensleep, Wyoming where I crossed paths with a climber named Urs who was similar in age but about quadruple my ability. He was dispatching 5.14 left and right while I was barely breaking into the 12s, so naturally I was a little starstruck. Our interaction was brief, but I told him I lived in Washington, and he expressed an interest in visiting Squamish. Wanting to seem like a cultured local to this total crusher, I immediately told him he should get on the Big Show. It was far too hard for me, but this guy might stand a fighting chance.

Over time in the years that followed, my climbing ability slowly started catching up to my dreams. Once I had ticked off a few routes that were theoretically as difficult as the easier paths up the Big Show, I decided to take a crack at Freewill, the 5.13c that’s as close as it gets to an entry level route for the wall. Since the angle is so steep I just assumed it must always be in the shade, and thus a premium option for a hot summer day. I couldn’t have been more wrong. It was thus that my first attempt at climbing on the Big Show was a sweaty disaster, in which I couldn’t keep my feet on anything, grabbed every single permadraw and freed none of the 5.13 moves. It was such a humbling struggle that after just one attempt I wrote off the dream of mine to climb on that wall as just too big.

In Mexico over the past winter I happened to reconnect with Urs, the kid I had met in Tensleep all those years ago. He wasn’t a kid anymore, but in all his travels he never had made it up to Squamish. Already making my own plans to return, I invited him to join me in the northern swamps of British Colombia I had grown so fond of. We had a different objective in mind for our partnership, but much like me he became enamored at first glance at the sea of chains, carabiners, and permadraws hanging from the Big Show. I had come a long way since we first met, no longer quite so dramatically outranked, but so had he. Luckily there’s enough hard routes there to keep anyone busy for at least a little while, so we started making regular pilgrimages to Cheakamus Canyon to feel the lactic acid exploding out of our forearms on the Show. He dispatched the easier routes up there quickly, and his psyche and incredible ability inspired me to step outside my comfort zone and try them myself. Even if I couldn’t do them, I was sure to get stronger trying. I had finally found the courage to give the dream a real try.

Not wanting to pay the skin toll of falling out of Freewill’s crux fingerlocks, I quested up a different route, Division Bell, with no small amount of trepidation. Had anything changed since the last time I’d thought this was a good idea? Apparently it had, because within the first two days I had done all the moves, broken a key foothold, and then done all the moves a different way. Not long after that I managed to one-hang it. Then one-hang it again. Then again, and again, and again… always in the same spot. No matter how perfectly I executed the moves, I would always leave the rest, do three moves, and then feel all the reserves of strength I had instantly evaporate from my body. What had initially seemed like quick progression turned to doubt. Did I still not have what it took? Would I ever? I had heard stories of friends one-hanging routes on the big show for years on end, or taking upwards of fifty tries to send their projects, and I feared the same fate for myself.

The more I climbed on the Big Show, the more my perspective of it began to change. Its sheer size and angle intimidated me less and less, and it began to inspire me more and more. Not only is the climbing gymnastic, dynamic, and straight up fun, but the wall holds a certain aura and history that has been a meaningful calling in the projects I choose lately. It’s home to Canada’s first 5.14, Pulse, and has served as a proving grounds where some of Squamish’s best climbers cut their teeth. There is another side to its reputation that isn’t as obvious that also added to my drive to climb there.

When it rains in Squamish (as it is known to do) there aren’t a whole lot of things that stay dry. The Big Show is certainly one of them until it starts seeping, but there are also a number of routes at the neighboring walls that are sheltered enough to provide options in more moderate terrain. That, plus the fact that the Circus boasts some of the higher quality sport climbs in the area, makes for a high flow of traffic through the canyon on the busier days. It makes for an interesting scene, with few people actually climbing on the Big Show, but many spectators excited to watch the sports action. Of the climbers actually working routes alongside me so many meters off the ground, none of them were women. When my good friend Tanager had been projecting Freewill last fall she also had been the only female up there with all the guys. I also received many comments from spectators that they had never seen a girl climbing up there before. Division Bell itself has only been sent by four or five women. Discussions with local friends further informed me of what was accepted as common truth: the Big Show was a boys club.

Knowing that others have or have not walked the path that lies before you can have an interesting effect on the psyche. For many it would cause intimidation, for others excitement at being a trailblazer, while for some there might be no effect at all. For me it added a fierce motivation. I had fought so hard to conquer my doubts and insecurities about being up there on the Big Show, that perhaps adding my story to its history might ease someone else’s battle, even if only just a little bit. The idea that the Big Show had a reputation of being a boy’s club didn’t sit very well with me, and I couldn’t help but hope that maybe I could help change that.

As the weeks went by climbing on the Big Show I felt not only myself getting stronger, but my friendship with Urs growing at the same time. The first time that I one-hung Division Bell was the same day that he did the same on Pulse, his project at the time. He sent many days before me, but when he clipped the chains he said it didn’t really count until it was a team send and I was able to celebrate my victory too. We had already shared many team sends such as Southern Lights and the Great Arch, but we had also shared plenty a beer, swim in the river, or lazy morning parking lot vortex over the course of our time climbing together. I had drawn drive and inspiration to climb on the Big Show from many places, but that random kid crusher I had sprayed about it to in Wyoming all those years ago was probably the most important piece of the puzzle. When I clipped the chains on Division Bell and then unclipped them for the most satisfying victory whipper of my life, Urs at the belay was yanked up to the first bolt with the force of the fall. It wasn’t me completing our story on that wall together, but the beginning of the next chapter because there’s a lot more routes up there, and in the words of Todd Skinner, we must always “Keep dreamin’, stay hungry, and remember that there is no finish line.”